Jordie was beaming from ear to ear. It was not difficult to see why. He didn’t have any worry to show, not since we left Kuala Pilah. It was just before 8.00 pm.on . We were on our way back to Kuala Lumpur.We had stopped at the Seremban Highway Rest Area for a ‘cuppa’. Hanafi who had just then done his Maghrib prayers joined us and ordered refreshments.

“We’re all set,” Jordie said. Both Hanafi and I nodded in unison. “now we have to decide on a schedule to progress further.” We again nodded.

We had left earlier in the day, sometime around “We should reach Kuala Pilah by or thereabouts.” Jordie said.”. That should be ideal..Rightly so because from readings on the internet, the birds would apparently come to roost back to their nests at around that time. “there’s no need to speed, as we are way ahead of the evening rush hour”, Jordie reminded Hanafi who was driving.

Only 2 days before, Jordie had acquired the CD. He said he had not heard it before and he would like to test it on site. That was the sole purpose of our journey south to Kuala Pilah, to test the CD and to see how effective it would be.

We arrived on the dot. We parked by the roadside. Jordie assured us that we need not go into the land area which was a further 200 metres inside.Hanafi went about setting up the

contraption. It comprised speakers to be plugged into the cigarette lighter of the car thus doing away with any need for batteries. It was actually a recording of swiftlets’ young under duress.

When we played the CD the sudden cracklings and shriekings were a bit of a bother. It was the sound of panic. Similar sounds would invoke a response from adult birds in the sky to naturally answer the distress call to protect their young.

Hanafi placed the item on the car roof, pointed the speakers skywards, plugged it in and ‘hey presto’. The cracklings and shriekings filled the air. It barely took 5 seconds before the sky above was swarming with birds. Initially they were gliding around on a higher level until a few began to swoop in and got closer to us apparently to check around. After a frenzy of flying, gliding and diving for about 10 minutes the birds got back to the higher level and eventually flew off after realising they had been fooled.

Only then we realised and became aware again of the bothersome cracklings and shriekings. Barely a few minutes before it was plainly music to the ear when the birds were hovering above us.

We stayed on for a while to savour the satisfaction of the success of our test and the peace and tranquillity of the countryside at dusk. Jordie smiled, smacked his lips and declared triumphantly that “your land is ideal for a birdhouse!”

We proceeded back to Kuala Lumpur.It was a leisurely drive knowing fully well that there’s a lot to be done and this was only the beginning!

Posted by kaykuala at 9:06 PM 5 comments

What’s in a Name? 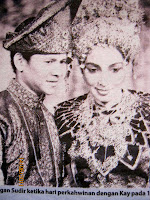 Allahyarham Sudirman and Kay on their Wedding Day

“A rose by any other name smells just as sweet,” so a sage quipped a long time ago. So what’s in a name?

But Hank is ok, I thought. Isn’t it ok? Friends back at my College (at the RMC) called me Hank, they still do even today, after so many years! “What’s wrong with Hank?” I asked my wife, Shadah more of trying to reassure myself rather than expecting an answer.

It’s fashionable to have a special name in blogosphere my wife reasoned. It should be an acceptable nickname she cautioned.

“Nothing , but can’t you be more original?”

“ ‘k”, I said, barely audible, agreeing with her. (my youngest son Azhar will text me ‘k’ to signify ok when he agrees. That’s the language of young people these days, somewhat shortened and may even be confusing at times)

“…but Kay is feminine, remember late Sudirman’s ex-wife?”... my wife reminded me.

“Yes, I know that… so also Kay Kendall, the ex-wife of the late Rex Harrison” ( both screenstars of old ) I unwittingly added.

“That’s not what prompted me”, I confessed (…I felt cornered).

“So what prompted you?”, she asked.

“I was thinking of ‘kay’ in ‘kaya’ meaning ‘rich’ that’s what all birdhouse owners aspire to be”, I replied sheepishly.

“Ok, fair enough, fair enough and I will willingly and certainly pray for your success. I will certainly ‘doa’ for you to be rich”. she said. She agrees and I felt relieved.

“But a nickname must be unique”, my wife quickly added again…

“I will add ‘kuala’ to it, that’s where I was born, Kuala Pilah, that should make it unique”, I said.

“I was born in Titi Gajah” she countered in an instance. Yes, Titi Gajah!

It left me wondering her motive for saying so. There was a sudden silence..... each waiting for the other for the next move.

I remember very distinctly earlier on in our marriage of being constantly reminded of Titi Gajah. The marriage was blissful, loving and supportive and still is, for which I am ever so grateful to Allah, God the Almighty, and to my loving wife most definitely. Ever so sweetly…honey!.

But I was constantly reminded of her pride in sharing her birth place, Titi Gajah in Kedah, with someone well known - Tun Dr Mahathir. Before she could remind me again, I said,

“…but Che Det chose the nom de plume of his student days for his blog…”. there’s no ‘Titi’ or anything like that in his name. I know he was born there. I should think he is proud of Titi Gajah, also” I was trying hard to appease her wounded pride, for not adopting Titi or Gajah as part of my nickname.

She somewhat remained silent. Phew! It was close. She didn’t flog the issue, I was relieved again.
I could have ended with ‘kaygajah’ as a nickname (or even 'kaytiti' which somewhat sounds odd) She didn’t insist, not this time.'Kaygajah' sounds monstrous and unwieldy. Maybe that’s why.

The nickname ‘kaykuala’ on the other hand sounds forgiving, free flowing (kuala means estuary of a river) elegant and with a mysterious serenity around it. So I think!

Yes, kaykuala it is… feminine? Well, ok, afterall feminity sells as we often see in advertisements. It bodes well for the business.

In this instance, it depicts the constant flow of an estuary, it has also part of ‘kaya’ (I just can’t help but repeat it) richness and riches as a consequence which is good and finally it has my roots in it, 'kuala' all bonded into one…yes, yes.., a Tiger Woods punch in the air…., yes , kaykuala it is!

Posted by kaykuala at 9:17 PM 3 comments

Jordie called about a month ago. That’s when it all started. He was all excited. He couldn’t contain himself. What’s up? I enquired. I’ll tell you in an hour. Meet me at the KFC, One Utama, he said. We are Petaling Jaya residents so it is convenient to meet there.

We used to meet at a number of odd places to discuss our project which is as yet to get off the ground. It’s a mixed development housing project and Jordie is my partner. Conversion of the land and other related matters with the authorities were taking time.

This time Jordie was all excited and all excitement. I could see it must be something big, current, something challenging and something that brings the big bucks fast, naturally.

I have an idea, he said. We need not even have to seek prior approval from the authorities. We can start straight away. It is all up to us.

Whoa, hold your horses! Tell me first what is it, what’s bugging you, I countered, trying to bring some semblance of reality.

A birdhouse, yes a birdhouse he said, repeating it just so I got it. You mean……I interjected. Yes, he said not giving me even a chance to finish my sentence.

I have heard of these birdhouses. I thought the enterprising guys just converted not just any old and abandoned buildings but these must be somewhere along the Perak coasts or something.

No, it need not be by the sea nor near some caves, no nothing like that, Jordie said. It is now even in the centre of towns. It can be in the city or it can be outside the city he emphasized. So your 15 acres of land is just ideal, he said. Most of them have just one or two shoplots converted and they have neighbours who occupy the adjoining lots.

My, I was thinking to myself. What with my 15 acres? Quite a few dozens of birdhouses can spring up from there, may be, I wonder how many?

We’ll just build one birdhouse Jordie said, as though he could read my mind. He could somehow guess and answered my quizzical look at the same time!

It is already a month since and we have done our homework. I scoured the internet for information and Jordie scoured the country side for the physicals.

Tomorrow is the day of reckoning. Yes, we are driving south. We are going to test whether the land in Kuala Pilah is suitable for a birdhouse.