The Annual Camp from 25th July till 9th August 1963 was in Kamunting, Taiping in the northern part of Perak state. It comprised those from the Lower Six Forms and those from Form Fours ( in the honeymoon years so to speak ) who had no major exams to sit for at the end of the year.

The Fourth Formers were freshies who had just joined the RMC at the beginning of the year. They would have gone on a week-end camp at Kuala Kubu Bharu ( KKB) to prepare them for this Annual Camp. It would now be a big thing for them. They found themselves ‘playing soldiers’ at age 16 with all the ‘real army things’ provided, even firearms and ‘live’ bullets, ( at the 0.22 shooting range) . All of them were just too eager on any activity as most things experienced were new to them.

There was an average of about 12 boys per Coy , close to about a 100 boys in total. There were also about 20 others comprising the Officers and Other Ranks who provided logistical support ( the exact number of all categories could not be determined exactly)

The camp-site was more forgiving than that of the Annual Camp 1960 in KKB which was within a typical jungle environment. The Taiping camp-site was more of a waste-land, about 12 kms from Taiping town in a dry area with scanty vegetation and with thin and dry undergrowth.

(Following an exchange of notes with my buddy , OP Zawawi (Datuk) a Taiping boy, we just could not place the present location of the Camp-site now. It may well be where the present Kamunting Detention Centre is located. It does not really matter though.)

In a way, having a venue somewhere not entirely in a thick jungle environment, made it convenient for organising the inter-Coy competitions differently from those before. We could utilise the shooting facilities at the Royal Malay Camp, had Maxwell Hill for the Endurance Run, besides the usual Tug-of-War and Volley-Ball games on site.

This will be in the form of a pictorial essay tracing back activities we went through in and around Taiping within those 2 weeks. 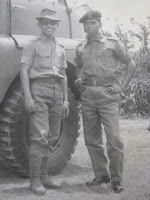 With Razali:
We had just arrived at the Camp-Site in Kamunting. Razali was the driver of the 3-tonner ( military truck ) that transported G Coy ( Coy stands for Company) all the way from Sungai Besi to Taiping. I remembered it well. The trucks were all lined up in a row that dawn of July 25th in Sungai Besi.

Surprises, surprises! We were loading our things onto the truck and there was Razali, my village mate. We grew up together, I was in KL and Razali was in Gemas but we often met during the school holidays in Kuala Pilah where our roots were. I had no indication he joined the Army until that morning - we met in a million-to-one-chance sort of situation. 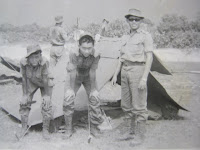 Temporary Tent with my tent-mates.: From Left: OPs Suhut, Michael (Dr) and Hank. We hastily had the tent up just a few minutes upon arrival ( pending allocation of specific areas for each Coy). 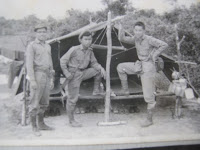 Our More Permanent Structure : With my tent-mates at our 'home' for 2 weeks. 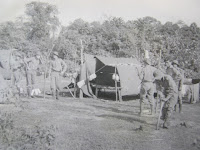 The Camp Area of G Coy : As can be seen we were still working on improvements to the general area. 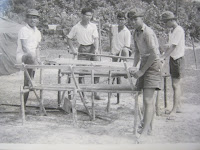 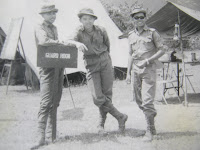 Guard Duties : In front of the make-shift 'Guard-House' From Left: OPs Amat, Michael (Dr) and Hank. 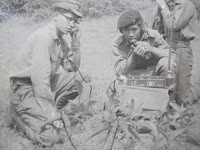 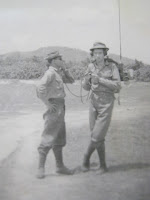 Wireless Communication From Left: OPs Hank and Michael (Dr) Notice the background, bare, devoid of vegetation and dry ( very unlike Taiping, reputed to be the wettest region in the country ) 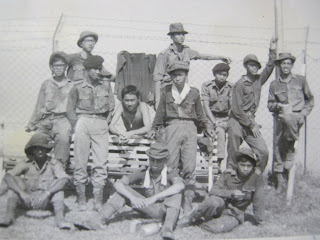 G Coy, At the End of the Endurance Run, up at Caulfield Hill ( A higher point up on Maxwell Hill ) All Sweaty and Tired, From Left: Front Row: OPs Rajan, Amat and Alias. Middle Row: OPs Amiruddin (Dr,Datuk), Zawawi (Datuk) Michael (Dr), Suhut, Tajudin (from A Coy who was one of the Marshals), Nasir (Dr), and Hank. Back Row: Jeffery (Dr) and Ismail (Dr)
We were required to run up Maxwell Hill ( now known as ?Bukit Larut) as a team with Marshals coordinating traffic along the narrow road. It was one of the events in the Inter-Coy competition. 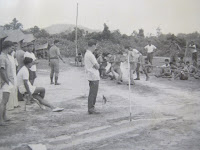 Tug of War: Another of the events in the Inter-Coy Competition 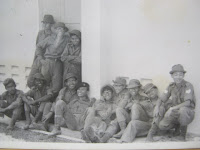 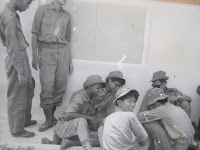 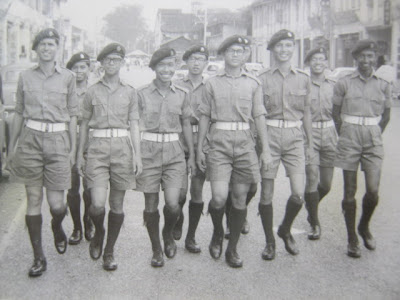 Outing at Taiping Town: From Left: OPs Ismail (Dr) ,Alias, at the rear, Amiruddin (Dr,Datuk), Suhut, Jeffery (Dr) at the rear, Nasir (Dr), Weng Yin, Hank, at the rear, and Rajan
We took the opportunity to organise visits for a day of the vicinity. At the Annual Camp '61 in Cameron Highlands, it was the Hydro Electricity Dam 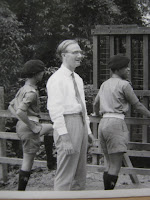 Outing At Taiping Zoo: Capt Underwood ( Company Commander) was one of the expatriate teachers in the RMC then. For our Annual Camps it would be mandatory to have the presence of Officers, and they would normally take the opportunity to accompany us in such outdoor activities including expeditions. 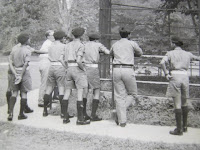 Taiping Zoo Again : With Capt A C Loone, (Company Commander) , the one without Beret. 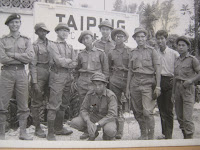 ( This snap-shot was taken sometime later in the day, probably in the afternoon. OP Zawawi (Datuk) is seen here not in uniform ie he was in 'civilian clothes' as, being a local boy he had already reached home. He came just to see us off at the Railway station )
Posted by kaykuala at 9:57 AM

Dear Hank,
I could still remember vividly this Annual Camp, where we got lost during the night march and came out at a place which was far from the expected point. And also we spent a night where there were cowsheds nearby and in the morning we were all scratching owing to the ticks that found its way to our bodies.

Dear Hal,
At least you remember it. I cannot recollect what happened at our night march