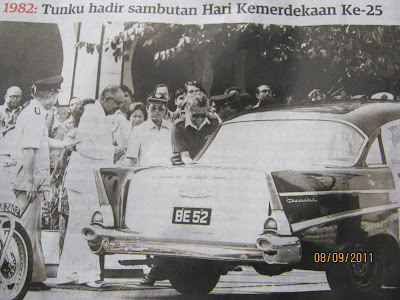 Image1: Our first Prime Minister YAM Tengku Abdul Rahman being received upon arrival in conjunction with the Silver Jubilee of Merdeka in 1982
(Photo Credit: Courtesy of Utusan Malaysia) 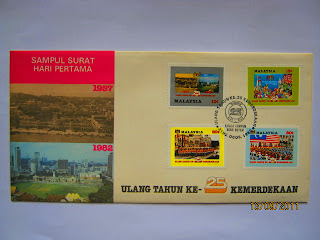 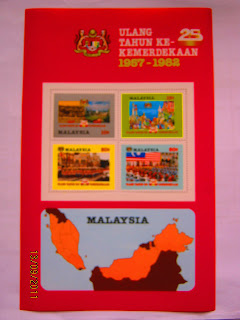 Image3: Souvernir Sheet of the 4 stamps


FDC Series # 01/11 – Silver Jubilee of Merdeka 1957-1982
Merdeka Day ( Aug 31st) and Malaysia Day (Sept 16th )
For this year, 2011,we’re celebrating both the 2 auspicious days jointly on Sept 16, 2011 ie  The 54th Anniversary of Independence, Merdeka Day and the 48th Anniversary of the formation of Malaysia, Malaysia Day.
I do not wish to dwell on the details relating to both these important days. It could be dealt with at other forums that are available. One can google for Wikipedia to get a fair picture.
What triggered off the idea for this posting was a pictorial report in a local daily of our first Prime Minister, YAM Tengku Abdul Rahman Putra Al Haj who was shown  on the occasion of the 25th Merdeka  Anniversary in 1982 (see above) it being the Silver Jubilee 1957-82 of Merdeka.
I thought it would be meaningful for me to rummage through my collections of FDCs (First Day Covers) to see if there is one. True enough, I have it. In fact not just one but a few, 25 pieces altogether.  I have given some away during the recent Hari Raya which fell on Aug 30th ( in appreciation of those who came visiting ) Each of these FDCs issued on Aug 31st 1982 is ‘29 years old’. I wonder how much is the value now. Not much I think but there is a difference from what I had paid definitely.
There were a 10,15,50 and 80cts stamps affixed and cancelled at the Philatelic Bureau at Dayabumi  ( a special cancellation unlike at other Post Offices) There was also a special issue of all the 4 stamps in a Souvenir sheet at RM1.55 per set. Altogether I would have spent RM 1.55 for the Souvenir Sheet and RM1.65 for the FDC ( including 10ct for the envelope) making a total of RM3.20cts per set.
Posted by kaykuala at 4:43 PM

Do children today enjoy stamp-collecting as we used to do those days? It is all electronic these days. Even bookshops will probably close down. I am certain your FDCs are still worth something.

The Far Eastern Econ Review which I subscribed to before is no more now.So also other mags and 'papers. Yes,books and movies are cheaper and there's a whole range online.

Dear Hank,
As a collector of FDC, it is not the ringgit and sen which is the measure of their value, but your diligence and dedication which is not counted by its surface value. You should have kept them as an inheritance for your grandchildren and their children. Better still, have them as exhibits in your personal collection.

As stated by Stanford Medical, It's really the SINGLE reason this country's women live 10 years longer and weigh on average 42 pounds lighter than we do.

Over 160 000 men and women are utilizing a simple and secret "liquids hack" to drop 2lbs each and every night as they sleep.

It's very easy and it works all the time.

This is how you can do it yourself:

1) Hold a glass and fill it with water half full

2) Proceed to learn this awesome HACK

and be 2lbs thinner when you wake up!